Thunder and lighting along with heavy rain showers hung over Mississauga at 5pm on Thursday 25th of August 2016, and when the intense storm didn’t show any sign of letting up by 5:45pm, the organizers of the Singles Golf Lessons & Networking event were ready to pack it in, and cancel their 6pm event.

But a few minutes later everyone’s prayers were answered; the clouds retreated and the sun returned to the sky just in time for the first-ever Singles Golf Lessons and Mixer event ever held at Lionhead to begin.

“Any other time of year I’d have cancelled by noon, but in July and August its so hot outside, getting wet can be fun.’ – Laura Bilotta

Single in the City specializes in running Speed Dating events but Laura Bilotta also offers a custom cupid service. Laura Bilotta is a matchmaker and the service is close to her own heart.  She does all the matching herself and stresses quality, but finding hard working middle aged people who are single and looking to be matched up is always a difficult challenge. 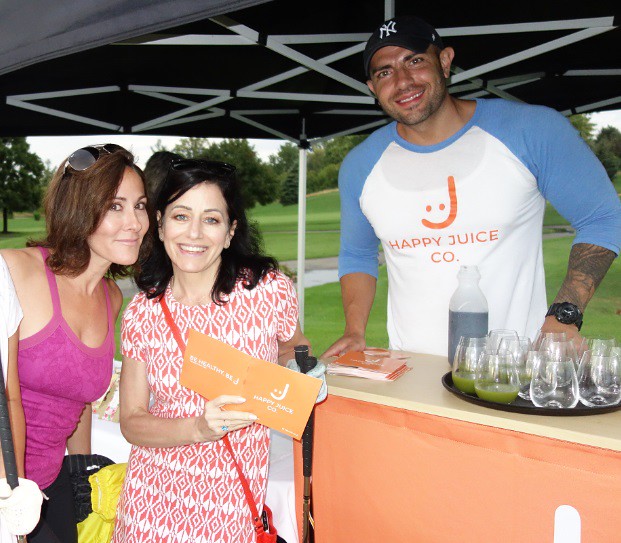 Singles Golf Lessons is just one more way Laura casts her net. The whole thing was her idea, an experiment she hoped would add more sophisticated singles to her database. We think Laura shopped the idea around to a few different golf courses before she brought the idea to idea to Lionhead, and in truth when we first heard her plans we laughed, and thought it was all a joke. But she was serious, and with a little help from us, she pulled it off.

Out on the driving range we put up a tent to protect people in case of another torrential downpour and also to add structure around two event sponsors who couldn’t have been more different. 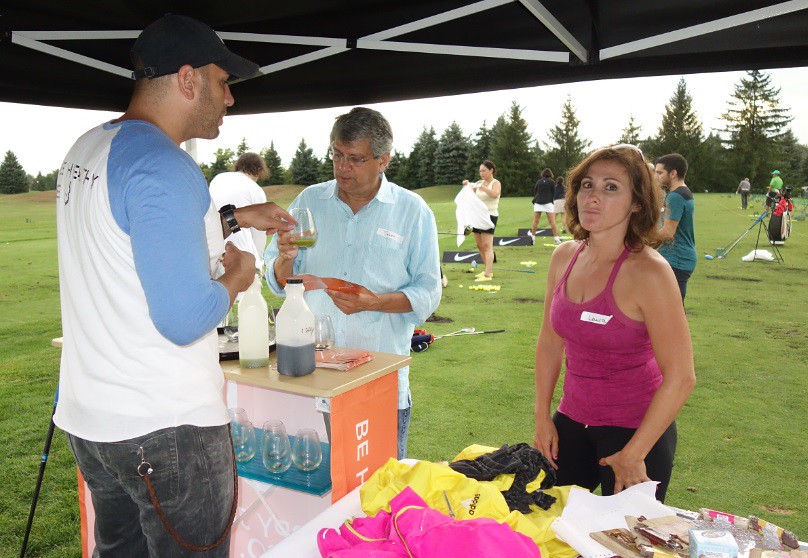 On the night of the event there were two different food and beverage sponsors on site. The first was a gourmet chocolate bar company called Sweets Canada whose chocolate bars come in odd little burlap pouches and the ingredients are just as strange. Most product on display included edible flower blossoms. We spotted chocolate combinations with rose petals, jasmine, lavender, safflower  blossoms and sunflower petals.

The two sponsors were intelligently paired, and the decadent chocolate offering contrasted nicely with the second exhibitor, Happy Juice Co’s cold pressed juice products which occupies a product niche at the other end of the health spectrum.

Here is a picture of David Vene from Happy Juice Co with Bradlee Ryall inside at Iggy’s before the start of the event.  Happy Juice Co used the athletic occasion to exhibit two exceptional recipes with very different ingredients, appearance and colour; David was pouring Sunshiny Kale, a starter juice if you’re just getting into raw, fresh juices. This mixture, David says, “lets people drink their greens without knowing it“, and Twilight Lemonade made with honey and fresh lemons appears black because it also contains activated charcoal which is believed to be able to extract toxins from human bodies.

Singles’ Golf Lessons is a bold concept for Ontario, but its not entirely new; events like this are real popular all through the USA especially where they have warm summer nights for most of the year. Unlike other singles events, daters who attend co-ed Golf Lessons drive to a golf course ostensibly to sharpen their own golf skills, but also to meet other single people who might share their passion for the sport.

Participants are placed into small groups where organizers hope they’ll mix and mingle and share digits either on the course or in the club house afterwards. On paper the whole thing looks kind of kooky, but when you get thinking about it, the concept is actually pretty cool.

In our August experiment, the challenge of creating and teaching the uniquely bisected group golf lesson fell to Ian Hogg, our head golf instructor over at Royal Ontario.  Ian began by going over the basics of golf and the weights and purpose of the different clubs and how and why drivers are used on the fairway. Look at this guy’s fancy pants! Ian was heard to say ‘if you’re gonna wear pants like that at Lionhead, you really better know how to play golf.’ 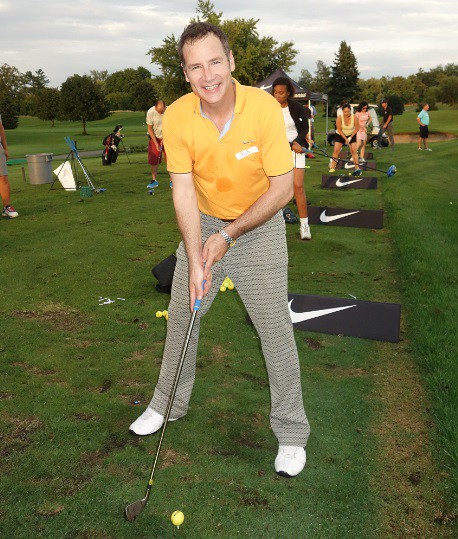 The relaxed and casual manner of Ian’s presentation inspired many attendees to mimic his motions, practice their own stance, and check their grip accordingly as they kept up with the flow of his gentle tutorial.

Placing the ball on the tee in his hand and putting both in the ground at the same time, Ian next showed how high to set up the golf ball in relation to the driver’s face. The ball should be half its height above the driver’s face when the club is resting on the ground. And when Ian finally hit the ball it went all the way to the very back of the driving range at Lionhead and the crowd was audibly impressed and gasped in admiration at the accomplishment.

The Putting Derby – because the rest of the golf course was soaked, and we were rapidly losing the light, Laura elected to follow Ian’s advice and replace the one-hole golf game (which was scheduled to begin at 8:45 pm on the ninth hole of the Master’s Course at Lionhead) with a much simpler and more efficient Putting Derby style competition.

The attraction centered around a prop which we call a Putting Board; its a short thick wooden plank that has five different sized holes cut in the bottom.  The smallest holes on the ends are worth fifty points each, while the largest opening in the center is only worth ten points. Two openings for twenty points each fill in the middle sides.

One by one each attendee took their turn putting their ball toward the wooden plank until a competitor named Daniel aced the competition by putting his ball through the fifty point hole on the right side of the board.

The event ended with drinks on Iggy’s patio.

Because of the earlier rainstorm and despite of it still being a hot muggy night, the patio at Iggys was empty. So the assembly pulled together five different tables under the awning and spread out in a long line. People came and went as they explored the facility and used the washrooms etc  and when they returned they sat beside the people they liked the most. Groups swelled and broke apart as drinks and meals were served, and Laura made some announcements about upcoming events and spoke about new book.  I wonder if her next book will include a chapter about the Bradlee Ryall Golf Academy and the Legendary Singles Golf Lessons at Lionhead? We know we’ll never forget it.Save